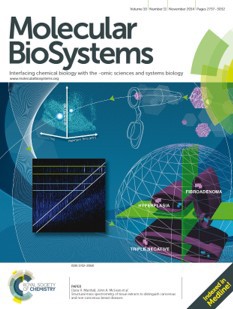 Aberrant metabolism in breast cancer tumors has been widely studied by both targeted and untargeted analyses to characterize the affected metabolic pathways. In this work, we utilize ultra-performance liquid chromatography (UPLC) in tandem with ion mobility-mass spectrometry (IM-MS), which provides chromatographic, structural, and mass information, to characterize the aberrant metabolism associated with breast diseases such as cancer. In a double-blind analysis of matched control (n = 3) and disease tissues (n = 3), samples were homogenized, polar metabolites were extracted, and the extracts were characterized by UPLC-IM-MS/MS. Principle component analysis revealed a strong separation between disease tissues, with one diseased tissue clustering with the control tissues along PC1 and two others separated along PC2. Using post-ion mobility MS/MS spectra acquired by data-independent acquisition, the features giving rise to the observed grouping were determined to be biomolecules associated with aggressive breast cancer tumors, including glutathione, oxidized glutathione, thymosins β4 and β10, and choline-containing species. Pathology reports revealed the outlier of the disease tissues to be a benign fibroadenoma, whereas the other disease tissues represented highly metabolic benign and aggressive tumors. This IM-MS-based workflow bridges the transition from untargeted metabolomic profiling to tentative identifications of key descriptive molecular features using data acquired in one analysis, with additional experiments performed only for validation. The ability to resolve cancerous and non-cancerous tissues at the biomolecular level demonstrates UPLC-IM-MS/MS as a robust and sensitive platform for metabolomic profiling of tissues.